The ZooTrophy Animal-a-Day project began on October 15th, 2013 as illustrator Angela "LemurKat" Oliver began working her way, systematically but selectively, through the alphabet and presenting, via social media, an illustrated animal to the world. Daily.

All pieces are drawn as 2.5 x 3.5 inch collectible cards, using a combination of polychromos and prismacolor pencils, along with other art materials. Many are still available for purchase ($10) or trade, so drop her an email if anything captures your eye or if there is an animal you wish to request.

It is predicted this project will take her at least two years to complete - with approximately 36 animals being drawn for each letter. She has also used the images to create a collectible hardback encyclopedia series, playing cards and a desk calendar, as well as the ZooTrophy collectible trading card game.

The Animal-a-Day project - An Interview with myself 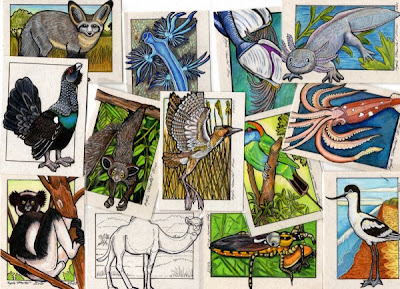 What inspired the Animal-a-Day project?
Well, one of my favourite subjects for my art is wildlife - and I especially like the more obscure critters, things that no one has ever heard of. Then, someone pointed me in the direction of My Zoetrope and I suddenly thought - what a brilliant idea, I'll draw an animal a day for an entire year. And thus I began.

A year, really? You're up to day 80, and still only on C!
Well, when I first considered a year, I failed to take into account how many wonderful creatures there are, and once I started going through and making lists from my DK Definitive Animal Encyclopedia , I realised that there were far more than 365 interesting creatures. So, I thought - why not dedicated each month to a letter... but even then, it was hard to narrow it down - especially since I started in the middle of October. And hey, wouldn't whatever letter wound up being featured in February be short-changed?

So how many animals are you actually intending to do? How long will this project take?
At a guess, two-three years. I did 37 critters for A, and 37 for B. I discovered that I can print photobooks via ArtsCow - the kind that people turn into bragbooks of baby photos or weddings or vacations or whatnot - and they will take a maximum of 39 pages. When you add in title page, contents and a bit of info about the project/artist, well that equates to a maximum of 36 per letter. I'm creating one photobook per letter. Well, maybe...

Maybe, what do you mean?
Some letters have less to offer than others. For example, with I and J combined I might manage 36 creatures. And can you really think of 36 animals starting with X? Or U? I thought not. Some letters will be combined into one volume. For others, like C, it is almost impossible to narrow it down to a mere 36 creatures. I'm thinking I might have to do the C volume in two parts...

There are that many animals starting with C?
You'd be surprised.

So how do you decide which creatures to draw?
This is the tricky bit... I want to draw them all, particularly the more obscure ones, but there are some animals I feel obliged to include - things like the big cats: cheetah, tiger etc. I think people would be disappointed if I just decided to draw only two or three feline species. And, since I also love birds - well, I've got to add in a few of those as well. And then I do rather like a challenge so I feel I should also add in some invertebrates, perhaps some spineless wonders. And then there's amazingly strange creatures like the Bobbit Worm and the Blue Dragon... well, people NEED to know about them. So... about the only animals I've excluded are those that look too much like other animals - for example I've chosen Capybara and Chinchilla for the Cs, excluding Coypu and Cavy, because... well, they're all just different species of rodent. Plus none of them are particularly interesting colours.

I'm also open to requests - so if there is a particular animal you would like to see illustrated, please do not hesitate to ask.

But there are a lot of lemurs.
Err yes, well, I am LEMURKat. Actually, confession time, someone challenged me to come up with a lemur for every letter. I'm not going to be able to do it, but I'm certainly going to let the world see how many different species there are. Although I likely won't draw them all. There are 30 or so species of Sportive Lemur, after all, and they all look rather similar.

Sometimes you draw individual species, other times one animal of the Family. What's with that?
Err, well - for example, there are several species of Anteater, but I just chose to draw the most typical (actually, one of the other species will appear under T), when I'm using the broader name, the sort of umbrella term that encompasses the various different species: ie: hyena, bandicoot, bittern, I've tried to draw the creature that most non-zoologists will picture with that species. So, for the Anteater I did the Giant Anteater, for Lemur I'll be drawing the ringtailed...

Very well, but the Pink Fairy Armadillo?
Okay, so that doesn't REALLY typify "Armadillo" but well, you have to agree, it's super adorable and if I had to wait until P to draw it - that's a whole year away. I might draw the more standard 9-banded fellow later, but for now the Pink Fairy stars.

How are you making these images?
I've got these A5 sheets of card, which I can draw 4 Art Cards on, I divide it up and get sketching. First I find some reference images - usually aiming for two or three with high definition, and pencil it in. I add the background, trying to find a reference of the typical habitat. After the sketchwork is done to my satisfaction, I ink it - using my micro pens (ranging from 0.05 - 0.8 mm tips) before colouring it with a combination of prismacolor and polychromos pencils, along with the occasional use of markers.

How long does each card take?
I haven't accurately timed myself, but I would say anything from 45 mins to 2 hours, depending on the complexity of the creature.

What is the hardest creature you have drawn so far?
That's a difficult question, but I would have to say - the barnacles were extremely challenging. They're very simple life forms, and the first efforts... well, let's just say, there is a reason I will probably be steering clear of drawing a clam. Then I decided to go with the Goose Barnacle instead, and I feel they were quite successful. The Abalone was also rather tricksy, but I was rather pleased with the result.

What are you going to do with all these Art Cards?
Well, I'd like to sell them (*laughs*). Actually, I've sold one (the Agama lizard), and traded maybe a dozen of the others. Currently I'm storing them in a binder, so I guess by the end of it I'll be able to have a miniature art exhibition. If anyone would like to buy one - they're $10 each, plus postage. I also am doing a giveaway on facebook every time I finish a letter. So, feel free to come along and become a "fan" of LemurKatArts. At the very least, next ATC gathering I manage to attend, I shall have plenty to swap!

Any other plans for the art?
Well, I'm going to have an entire set of Animal Encyclopedias, which should sort me out for Christmas gifts for the next... oh, ten years! And I will probably do a larger combined book, published via CreateSpace at immense cost, most likely (for the colour printing). Also am toying with a collectible card game or possibly an app. If anyone has any ideas for a game I could make out of them, please feel free to drop me a line. Still, with at least two years to go before I complete it, I'm sure I'll come up with something.

At least two years? That's quite a commitment. Are you sure you're up to the task?
Yeah, well, we'll see how it goes. Life might intervene in that time, or my fickle attentions may wander. We shall have to wait and see.

And lastly, how can one follow this Animal-A-Day project?
I'll be posting daily via this blog, also I have a tumblr account specifically for it, and a twitter account. As I gain more followers, I may even start giving spot prizes when my posts are re-blogged or re-tweeted. 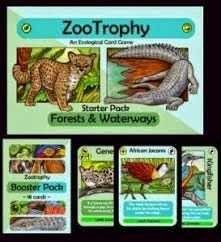 LemurKat
Lemurkat is an Amateur Illustrator and Artistic Dabbler. She loves the cute and quirky, weird and whimsical, ugly but endearing. She is an internationally established artist with her works of miniature art in over 80 countries. If you wish to view her art, you can visit her on http://lemurkat.co.nz but she is also Lemurkat on deviantart, and here, there and everywhere else. "Google" her and see!